The cl-cffi-gtk library provides Common Lisp bindings to GTK. The library is developed with SBCL but should also work with Clozure CL and CLISP. For this tutorial, I'll be using SBCL. Instead of building yet another calculator, let's build a GUI for generating a tone. 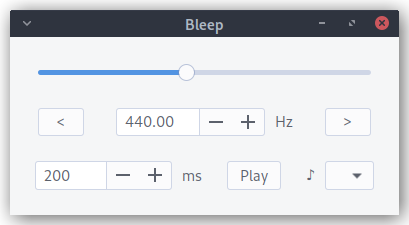 The Common Lisp bindings to GTK can be installed with Quicklisp. If you don't already have Quicklisp installed, it's painless. See the Quicklisp website for more details, but here's an example of installing Quicklisp on Debian and configuring SBCL. The steps should be the same for any Linux distro and macOS.

The "proper" way to include a dependency would be to use ASDF and create a .asd file for the project. Since this is a quick tutorial, I'll use with ql:quickload.

The first time you run bleep.lisp, it will take awhile as Quicklisp downloads cl-cffi-gtk (by default it will be downloaded to ~/quicklisp).

Although written in C, GTK is object oriented. It uses a portable object system called GObject. GObject classes are wrapped with corresponding Lisp classes. You create a window by instantiating the gtk:gtk-window class.

The gtk:gtk-box is a packing widget. A gtk:gtk-window can only contain one widget at a time. Packing widgets are you used to pack widgets together and arrange them.

The gtk:within-main-loop macro does the work of setting up a GTK main loop. The macro does some additional bookkeeping to run the GUI in a separate thread. This is cool, because even after the window appears, you can still type commands into the REPL to interact with the program (e.g. query the properties of a widget). With most of the Lisp GUI libraries I've tried out, the GUI takes over completely once it is launched, and you have to close the window before being able to type commands into the REPL again.

Then add our packing widget to the window, and we're ready to launch our window. Now let's add some more widgets to it.

The range of frequencies audible by humans is typically between 20 Hz and 20 KHz (we lose the ability to hear some of those higher frequencies as we age). The musical note A above middle C>) is 440 Hz. Since A4 serves as a general tuning standard, it seems like a sensible default, but if you run the above in SBCL, this is what you'll see:

The scale of 20 to 20,000 is so large that 440 doesn't appear to move the slider at all. Ideally, 440 would fall about the middle of the slider. To achieve this, let's use a logarithmic scale.

I found a Stack Overflow answer on how to map a slider to a logarithmic scale. The code given in the answer is JavaScript, but it was easy enough to port to Common Lisp.

I added some global parameters to the top of the script. The variable name *min-position* is just a Lisp naming convention for global parameters. I came up with the range of 0-2,000 by trial and error. It seemed to strike the best balance between each step of the slider making a noticeable change to the frequency while still allowing the user to narrow in on a specific frequency with just the slider.

Underneath the slider is a spin button showing the current frequency and buttons to increase/decrease the frequency by one octave.

We can also use boxes to help with layout. I created a function that I can reuse later to generate the spin button and label and pack them together in a box.

At this point, we are starting to have a nice looking interface, but it doesn't do anything. If you click the buttons or slide the slider, nothing happens. Widgets emit signals, and callback functions can be connected to these signals. If we connect a callback function to the change-value signal of the slider, that function will be called whenever the slider is moved. The arguments a callback function takes are dependent on the signal being handled. The adjustment object of the spin button has a value-changed signal.

Wire the buttons up to callback functions called decrease-octave and increase-octave. An octave is "the interval between one musical pitch and another with double its frequency."

We'll reuse the units-spin-button function we created to create a field to specify the duration of the beep in millseconds:

Frequency is rather abstract. Let's also give the user the ability to select a musical note. We can store the corresponding frequencies for A4-G4 in an association list.

We'll give the user a drop-down menu. Whenever a note is selected from the drop-down menu, we'll look up the frequency in the association list and set it using the set-frequency helper function we created for the octave buttons.

We'll use Common Lisp bindings to PortAudio to generate the tone. This can be loaded with Quicklisp.

Then you just feed PortAudio arrays of samples, :frames-per-buffer at a time. I initiated with-default-audio-stream with one channel, so the array is just a single-dimensional array of floating point numbers. If you were producing stereo sound, you would generate a two-dimensional array. The basic formula for a sine wave is A sin(2πft) where A is amplitude, f is frequency, and t is time:

Wire this up to a button between the duration and note selector, and you're ready to make some noise.

You can check out the entire example on GitHub. This started as a personal learning project to explore the state of GUI programming in Lisp and has become a series of tutorials on building GUIs with various dialects of Lisp.